hide
hide
No announcements have been posted yet for Renegades. 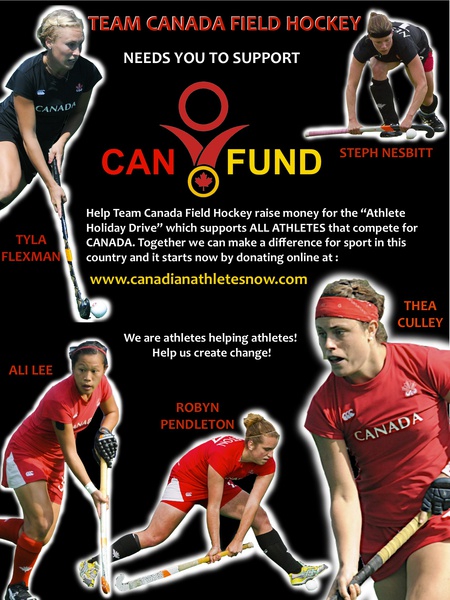 Every year several athletes are able to receive financial assistance due to a non-profit organization known as the Canadian Athletes Now Fund and this year five members of the women’s national team were chosen to each receive $6000. As individuals this money helps cover costs of team levies, travel, food and rent. Every little penny helps the team especially since this year, each athlete donated $2000 towards the team program, which gave the coach $10, 000 to plan some new tours. In order for Canada to excel on the world stage we need to gain more experience, which means traveling to play games and therefore fundraising. Each team member fundraises over $2000 per year and our resources are beginning to run dry.

The Canadian Athletes Now Fund helps supply our team with the funds we need to get moving the right direction to qualify for London 2012! On top of that, the CanFund helps many, MANY other athletes in all varieties of sport. It is for this reason that we believe donating to the CanFund will not only help each of us as individuals but also a"TEAM CANADA" as a nation-wide multi-sport team and family. Please think of the athletes this holiday season and realize that every amount truly makes a difference in our lives. We are playing with passion and pride for you as a Canadian! We want to help do you proud and this is a great way to show your support.

Most of you will have seen these already as they have been posted on the FIH website for a few weeks now. VMFHL will start the season Sept 18 with these new rules in place for our League. (As decided at the Club Reps Board Meeting Aug 31) The Club Reps decided not to wait til Jan 1st so as to avoid rules changes mid-season.

Changes to the Rules of Hockey (for international competition with effect from 1 January 2011 with reference to the numbered Rules in the 2009 edition) are as follows:
Rule 9.15:
“players must not force an opponent into offending unintentionally”. This Rule is deleted.
Rule 13.1:
location of a free hit. This former Mandatory Experimental Rule becomes a full Rule of Hockey.
Rule 13.1.d:
“a free hit awarded inside the circle to the defence is taken anywhere inside the circle or up to 15 metres from the back-line in line with the location of the offence, parallel to the side-line”. The option of taking the free hit “anywhere inside the circle” is deleted.

Rule 13.2:
taking a free hit, centre pass and putting the ball back into play after it has been outside the field. This former Mandatory Experimental Rule becomes a full Rule of Hockey.

Rule 13.9.a:
for an offence during the taking of a penalty stroke”. If the stroke is taken before the whistle has been blown and a goal is scored, it is taken again.

As the field hocke season draws near I would just like to take this opportunity to inform everyone of the upcoming leagues we have available for field hockey.

1. VILFHA
- The ladies league will run Sept 18, 2011-April 2011
- We are looking for new members so if you are a coach, at a school or would like to post flyers we have created an official "recruitment poster" available in the Document section on the right hand side of our website at www.vilfha.ca

THANKS and PLEASE MAKE SURE YOU REGISTER ONLINE WITH FIELDHOCKEYBC.COM IN ORDER TO PARTICIPATE AS A COACH OR PLAYER THIS YEAR!!!

Hi to everyone in the REBELS Field Hockey Club!

Please encourage all your team mates to sign up on TeamPages so they can be apart of the community for VILFHA and Field Hockey Victoria.

As our website builds you will be able to interact easily with not only people in your club but those in other clubs and leagues!

Please tell your team-mates to sign up as soon as possible so we can communicate with them!

Any questions, don’t hesitate to e-mail or ask me!

Welcome to your New TeamPage

Welcome to the Rebel Renegades Website! Here is where you can post and find your team schedules, news, scores, photos, documents, and message boards. It should make it easier to know what’s going on with the team.

So check it out and give it a try. If you have any questions email TeamPages support at support@teampages.com